Naina Jha from Safecity took a workshop about Sexual Harassment Awareness with the girls of Rainbow Homes, Patna in collaboration with Gupshup on December 22, 2019. This was our third workshop with the organisation. 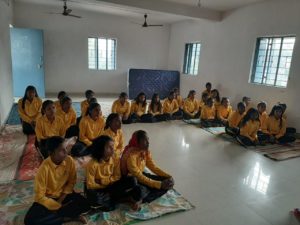 The session began by discussing what harassment is and what are its types. Next, we discussed a few steps which we can use to keep ourselves safe. The girls were informed about the laws related to Gender-based Violence and they were taught how to file an FIR.

We then encouraged asked the girls to open about their experience of harassment at any point in their lives. Almost 10 girls shared their stories. One of the girls shared that 10 days ago, one of her classmates committed suicide because her younger brother raped her. When she complained about it to her father when it first happened, he beat up the brother. After some time, the brother raped her yet again. Tired from the repeated sexual abuse, she committed suicide. Other girls complained of being harassed mostly when they go out for defecating in the open during early morning or late evening due to lack of toilets in their area of residence.