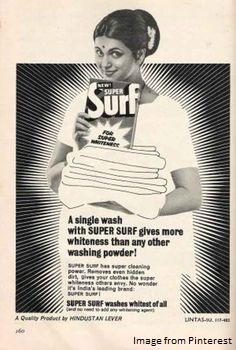 Komal Gesala is currently studying in T.Y.BCom from Mithibai College. She loves writing short stories and blogging in her spare time.

Everything Wrong with Indian Advertisements

Since its inception, media in its every form has a great impact on the society. An average adult spends one third of his time on one or another form of media and in case of teenagers and young adults, the time devoted to media is even more. A simple thirty seconds commercial can make thousands change their perception about gender roles, stereotypes, beauty, etc. But in India the change in the minds of the viewers is mostly negative, thanks to the repetitive stereotypical content of the media industry.

When we watch a commercial for domestic products like detergent, washing bars, floor cleaners, etc. we often see a woman wearing an ethnic Indian Salwar Kameez or Sari, holding the product and telling us how the product has revolutionized her daily household chores, how her husband is praised at work for his spotless shirt which “she” washed using the product, how the guests are now happy to see the shining crockery “she” cleaned using the product and how it’s safe for her kids to play on the floor after “she” mopped the floor using the product. We seldom see a man involved in any household chore. It is not like woman are dominating the advertisement industry, men have a share too. Men are portrayed driving a luxury car or a bike while a women sits on the backseat. They take on the world with their luxury watches and make the world a better place to live by consuming the so-called ‘sparkling water’ by various companies.

These advertisements assign specific gender roles. As young adults, teenagers and even kids watch these ads they create a perception in their mind that women are supposed to cook and clean and men are supposed to go out and lead the world. Why can’t a car company show a woman driving the car instead of a man wearing a perfectly tailored suit? This will help in eliminating one of the most popular belief that women are bad drivers. Why can’t a company selling domestic products recruit a male actor using their products to do the household chores? This will send out a message that household chores are not just a women’s job and both the genders should equally contribute to it.

Apart from advertisements that create gender stereotypes, there are other types of ads that exploit women by showing them as sex objects. Male personal care products like deodorants, soaps, face wash, moisturizers, etc. are often advertised in a way that is demeaning to the female fraction. They imply that if a man uses their product then women cannot resist being attracted to them, no other quality or qualification is needed and women are simply desperate to fall in their arms. These advertisements create a wrong image in the minds of teenagers and young adults who are easily influenced by these ads. Boys feel superior and dominant and girls feel like they are weak and fragile. It is important to ban ads which portray women as sex objects as it is completely undignified and insulting.

Some advertisements portray women as an epitome of beauty. These ads indirectly shame women for their skin color, skin problems, excess weight, body hair, etc. These ads create unrealistic expectations of body images for women, as in order to imitate the actress they tend to use a particular line of products. Teen girls nowadays are fat- shaming themselves and cutting off even essential food nutrients from their diet in the hope of maintaining their calorie count which is resulting in amnesia and malnutrition. Also, failure to meet standards set by these ads leads to women going into depression. They become too conscious about their body and overthink the “imperfections”. These ads act like an epidemic that slowly and steadily deteriorate the minds of young girls and women.

The content of all these types of commercials have a lot of disadvantages ranging from gender stereotyping to physical and mental health issues like anxiety and depression. However, not much is done by the media industry to ban or at least modify these commercials. These advertisements are publicized on a large scale. They are played widely on televisions, radios, online streaming sites, etc. The companies are satisfied by the increase in sales and the ad agencies delight in filling their pockets. Thereby, no one objects to the content of the ad and what damage it causes the general public.

India, being a country that is undertaking strategic ways to improve the quality of a woman’s life in the country, should really pay attention to these large scale de-moralizing ads. This is the first and most important step towards breaking gender stereotypes and reaching towards gender equality.