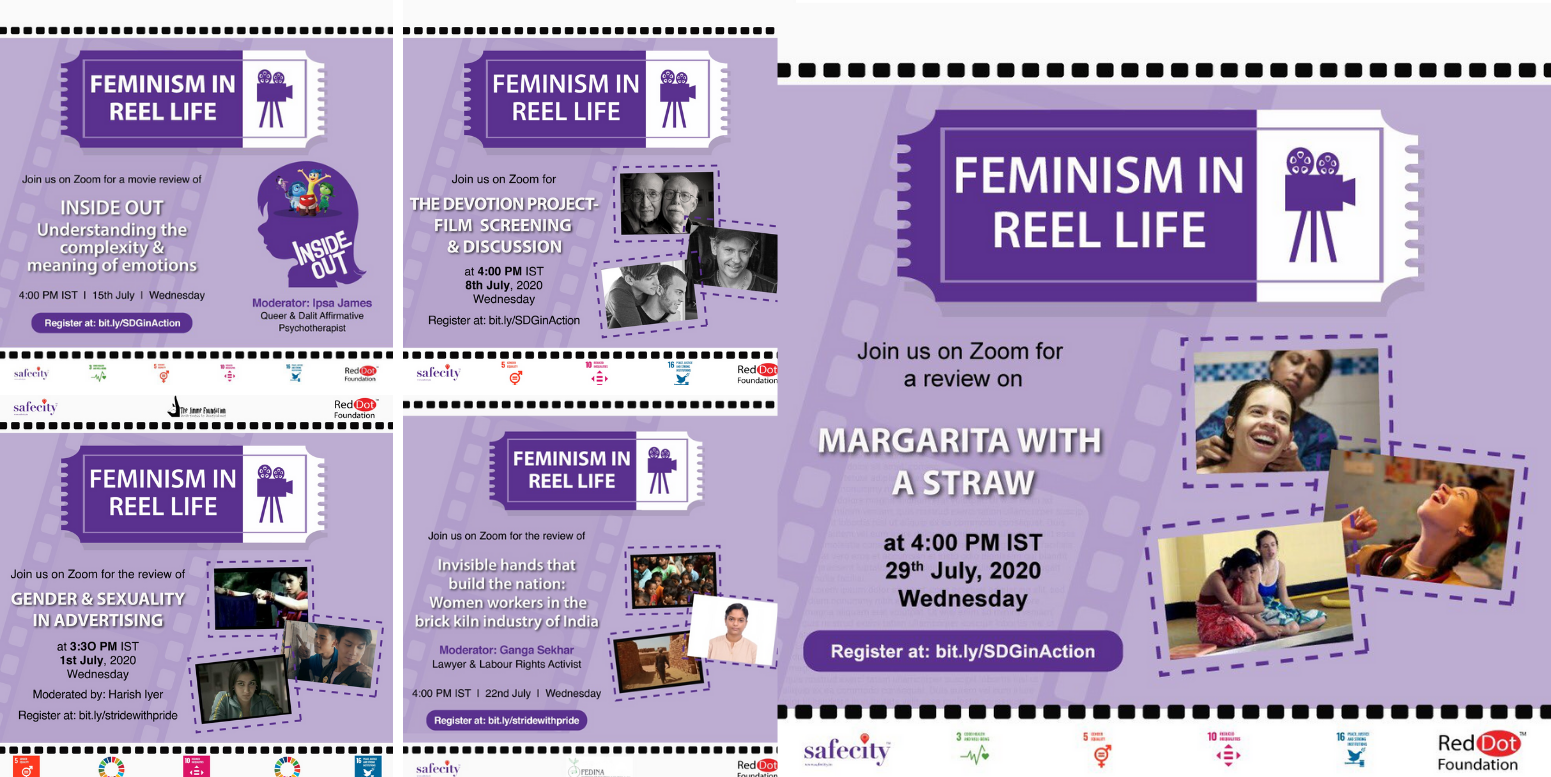 Feminism In Reel Life, Safecity Blogs, Sustainable Development Goals
Comments are off for this post

Harish Iyer, an equal rights activist, led the discussion, held on the 24th of June, on sexist advertisements that portray men and women in problematic ways. Issues of over-sexualising and objectifying women along with the reinforcement of gender-specific roles were some of the issues that were highlighted throughout the discussion.

Whereas, Ipsa James during her webinar held on the 15th of July, explained that the inability to being able to express one’s emotions or being out of touch with your emotions is the root of many mental health and gender-related issues. Being a Queer Dalit Affirmative Psychotherapist, Ipsalays emphasis on the importance of expressing your emotions, and the dangers of suppressing them. She asserted her point by using clips from the Disney movie ‘Inside Out’ that highlights the importance of expressing all kinds of emotions.

During the ‘FIRL’ session of 22nd July, lawyer and labour rights activist, Ganga Sekhar, described her experience documenting the pathetic conditions of brick kiln workers. While all brick kiln workers are subjected to exploitation, dangerous working conditions and low wages, women are often worse off. Women are usually paid less or no wage at all. Furthermore, since no bathrooms are provided, women are forced to join the fields where they are usually met with physical threats from farmers.

Some of the important suggestions offered by participants to deal with issues faced by brick kiln workers were to increase awareness through education; amplify these issues through various media platforms, and to provide workers with alternative work opportunities by teaching them new skills. The issues expressed closely resonated with the 2030 Agenda&#39;s goals, SDG 3: Good Health and Well-being, and SDG 8: Decent Work and Economic Growth.

While a webinar may prove to be challenging when attempting to create a more personal and interactive environment to engage in the discussion, the webinars organised by Red DotFoundation were characterised by a high level of interaction and learning. Moreover, the ‘FIRL’ sessions highlighted the close interlinked relationship between the various sustainable development goals, and the urgent need to raise awareness and education to tackle these issues. Being a participant in several of these discussions, I gained new understandings of old but deeply entrenched problems that exist within our society. I would highly recommend that everyone attend these webinars as they offer a lot of knowledge, insight and inspiration.

Views expressed are that of the writer.