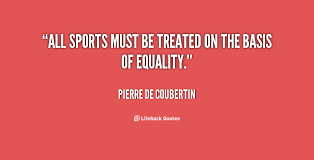 I wonder if there are people in India who haven’t heard the name of Virat Kohli or M.S.Dhoni or Sachin Tendulkar. At the same time it makes me wonder whether people in India are even aware about the existence of a women’s cricket team! When we use terms like ‘Indian Cricket Team’ or ‘Indian Hockey Team’, we immediately associate it with the men’s team even though the term doesn’t mention it. All this projects the rather depressive predicament of sports, embroiled in whopping gender bias.

A sport, by definition represents any activity which involves physical exertion and is played for entertainment or as part of the job. As UN women entity puts it, sport has the power to transcend boundaries of sex, race, religion and nationality; it promotes health and wellness, improves self-esteem, and teaches leadership, team skills and perseverance. But as of now, much of this power is latent, precisely because the society still views women as fragile and weak, not worthy enough of being given due recognition. This is plainly visible from the Forbes list of highest paid athletes of 2016 which featured only two women for the second consecutive year, Serena Williams and Maria Sharapova (at 40th and 88th ranks respectively). As incredible as it may seem it is true that in 2015, the highest-paid male athlete made 10.1 times as much as the highest-paid female athlete (Forbes list). Further, it is to be noted that both women who successfully cracked the top 100 list are tennis players and it is said that tennis is the one discipline where men and women have the same prize money in big events such as Grand Slam titles and some Master 1000. Even after providing almost same prize money, clearly there is staggering difference in payment and endorsements to the top seed male and female players in tennis.

Of all the challenges women face in sports, wage gap is the most predominant as is seen from the above figures. According to a report, in India, the gender pay gap across all sectors is 25%. It is sad to note that till recently, BCCI did not even provide job security to the woman cricketers where the guys had their salaries running to several lakhs and sometimes even crores! Finally in 2016, women cricketers were granted central contract even though the lucrative amount is lesser compared to what male cricketers get, it is a progress nonetheless.

Objectification of women peeks its ugly head in sports sector also. In advertising, much of what counts for female athletes is fitting the “look” which will sell, not being the best. The attire and beautification standards are, therefore, considered to be important part of a successful women’s ability to play sports.

This gaping gender imbalance can be attributed to a number of factors. In India, sports are never an option for profession especially when parents see only engineering and medical as the future goals of their children. The only sport to have become somewhat socially acceptable is cricket, which is limited to boys. In such an indifferent atmosphere, women are often discouraged from considering sports as anything beyond recreational activity. The restrictive scope of this field makes women ponder over better career building options. As a matter of fact, it is not unusual to find stadiums empty during women specific sports tournaments.

The media is also responsible for augmenting this gap as they hardly provide any coverage for female sports. Probably not being able to generate enough revenue or commercially exploit, such tournaments must form part of their woes. According to the University of Southern California, over a six-week period in 2014, ESPN’s ‘SportsCenter’ dedicated just 2 percent of its highlight program to women’s sports.

As of July 2016, 22 women are active International Olympic Committee (IOC) members (24.4 per cent) and four women (25 per cent) are members of the Executive Board. It is assuring that the UN Agenda for sustainable development goals has explicitly mentioned sports as an important factor for women empowerment and development.

Co-ed sports such as mixed doubles tennis or coed recreational leagues permit men and women to enjoy the social and fitness aspects of sports together. The governments around the world must initiate programs to ensure greater participation of women. Ensuring equal fixed salaries for both men and women in different sport categories can be the starting point. We must not forget that when India was left red-faced in the recent Rio Olympics, it was the women athletes who came to our rescue.

Prosperity of a nation is assured only when its entire population is healthy and not just one half. Hence, it is time we must give some serious consideration to sports for women.