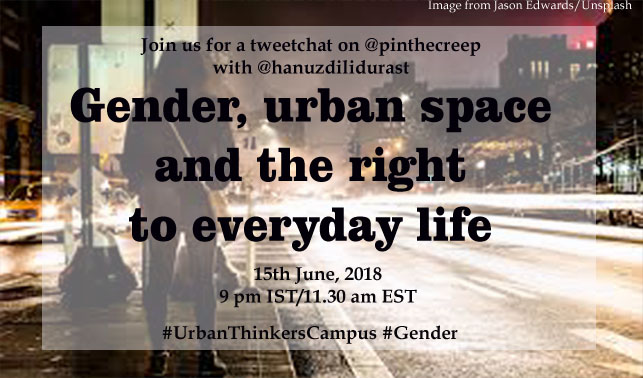 Safecity Tweetchats
Comments are off for this post
On 15th June, 2018, Rashee Mehra @hanuzdilidurast,an urban researcher with an interest in understanding the dynamics between gender and urban spaces, conducted a tweetchat on @Gender, Urban spaces and the right to everyday life’.
The chat first began by asking the audience to share how their everyday lived experience of cities help them in understanding urban space/planning.  They were then asked to share their perspectives on the problems in urban planning discourses that only understands and builds for binaries in gender, such as Men and Women. Rashee then asked the participants to share their thoughts on why there has been no systemic change to address violence against women in cities even though there is a growing articulation on gender/women empowerment  in bureaucratic and planning discourse. The audience was asked to share their views on how the ideas of the “Right to the city” can be expressed from a feminist lens and how, according to them, could planners and city officials learn from feminist experiences to build non-sexist cities.

A Tweetchat by Rashee!