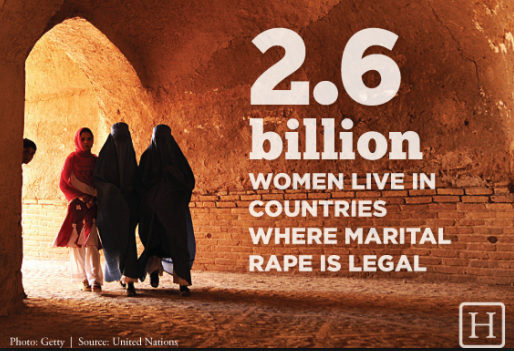 Shaziya Shaikh is a SyBMM student at St. Andrew’s College, Bandra. She is an aspiring journalist, and creative writer as well. She believes in improving oneself to become better and better in all stages of life and that life has a deeper meaning to everything, just because we cannot see it does not mean it doesn’t exist.

A Rapist Husband is No More Your Husband

Rape is a criminal offence, defined in most states as forcible sexual relations with a person against that person’s will. Marriage is defined as the legal union of a man and a woman for life, as husband and wife. While rape is breach of a person’s personal space and dignity, marriage is the beginning of a relationship of love, trust and respect. It is difficult to talk about two concepts formed on two premises individually standing miles apart. One being of love, respect and trust while the other is a blatant act of disrespect, cruelty and a dreadful suspension of trust. Marital Rape is when a husband forces his wife by any means to have sex with him, physically or mentally abuses her for sex. Rape is without doubt the most brutal act against humanity and its effect magnifies boundlessly when the perpetrator is a person as close as husband.

According to the WHO, Global and regional estimates of violence against women report, the prevalence of physical and/or sexual abuse by an intimate partner among ever-partnered women is 37.7 % in South-east Asia. As mentioned in the Indian Law Journal’s article, Marital Rape and the Indian legal scenario, 2/3rds of married women in India between the ages of 15 to 49 have experienced physical or sexual exploitation and NCRB has claimed of 98% of all the rapes are committed by a person known to the victim. An article by The Hindu, Marital rape: the numbers don’t lie, on 11th November, 2014 gives a see-through statistics of the Indian men from Punjab, Haryana, Uttar Pradesh, Rajasthan, Gujarat, Maharashtra, Madhya Pradesh and Odisha based on the researches done by The International Centre for Women (ICRW) and United Nations Population Fund’s (UNFPA). The results shows about one third of men out of the 9,205 men aged between 18 and 49 have agreed to have at least once had forced their female partners for a sexual act.

There is no hiding from the tormenting condition of women in India but our government refuses to accept the cause behind it being the orthodox and sexist beliefs of the society. After the Nirbhaya Rape case, our constitution has had effective amendments in the laws for rape with the help of the Justice Verma committee. Amendments to the laws for rape under Section 375 have redefined rape to expand its reach. A penetration of any kind, whether a body part or object, into mouth, vagina, anus or urethra of another person is considered as rape. A clear and unambiguous agreement to involve in a sexual act is defined as ‘Consent’ by the amended law and the lack of abstaining from the assault does not count for a positive consent. Recognition of other sexual violations such as Sexual harassment, Assault or Use of Criminal Force to woman with intent to disrobe, Voyeurism and Stalking as Section 354A, Section 354B,  Section 354C and Section 354D respectively is another step towards better access to the lawsuit for women.

The idea of marriage in our society is that of a sacred bond of love and commitment but the fading lines between love and lust depict a different meaning. An exception to section 375 of the IPC opens up ways to sexual assault within marriage, it says, “sexual intercourse by a man with his own wife, the wife not being under 15 years of age is not rape”. While the women of India are relieved to some extent with the amendments, a major part of the female population, the married women are still stuck in the murk of Indian traditions and customs because marital rape is legal.

In February 2015, the Supreme Court dismissed a case of marital sexual abuse that challenged the exception of section 375. When asked whether the government will criminalize marital rape, the Women and Child Development minister Maneka Gandhi dismissed the possibility with reasons such as illiteracy, poverty, social customs, values, religious beliefs, mindset of the society to treat the marriage as a sacrament etc. While these are the major issues the UN is attempting to cater with SDG 5- Achieve gender equality and empower all women and girls, criminalising the act all the more becomes a part of it. Instead of taking a step forward and doing the needful as India has agreed as a member state of the UN for SDGs our government is covering up the act of rape within marriage with traditions and customs.

Though we have progressed from shaming the victims to helping them out of the emotional and physical trauma. We still are being ignorant of the daily struggle a wife has to go through at the hands of her own husband. The fact that the laws meant to secure a woman’s sanctity are taken away from her when married unveils the strong presence of patriarchy and the resistance shown by the government adds fuel to the already existing fire of orthodoxy beliefs burning women each day. Reasons such as, marital rape if framed as a punishable offence can create major problems in the institution of family and marriage, said the government officials. What people fail to understand is that rape within marriage in itself is a major defect and that marriage is not a way to have your personal sex slave.