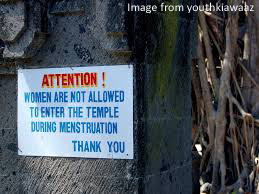 Krishnendu Nair is 20-year-oldld law student intent on improving the justice-delivery system of the country. She believes that even the smallest of unit in a society holds the power to profoundly transform a community. She enjoys spending time with children and getting to know the world from their perspective. In her free time, she’s most likely be found in the company of books, surfing online content or watching documentaries that unveil hard-hitting realities of life.

Nearly half of the population around the globe is marked by women which is the same as saying that almost half the world bleeds for an average of 3 to 5 days every month. And yet ironically even in this generation, talking freely about menstruation is considered a taboo among countless communities. This feminine cycle has dependably been mired in myths and misconceptions which make women the target of social stigmas. Almost all the existing religions in the world equate menstruation to ‘impurity’ but it is heartening to know that issues surrounding menstruation have started becoming the thread for public debate recently.

The Sabrimala controversy is still fresh in our minds. It all started when the Indian Young Lawyers’ Association filed a PIL and sought entry of women in the Sabrimala temple of Kerala. The temple prohibits entry of women in the age group 10-50 which corresponds to their menstruating age. The proceedings are still underway but the Supreme Court of India had observed that gender equality is a constitutional message and the temple authorities cannot cloak the ban under their right to manage religious affairs. Interestingly, a new campaign has started trending among the women in Kerala as ‘#ReadytoWait’ supporting the temple restrictions. But this is not all, when the Haji Ali Dargah trust was dragged to High Court of Maharashtra for imposing a ban on entry of women in the shrine of Pir Haji Ali Shah by founders of Bhartiya Muslim Mahila Andolan, one of the arguments tendered on behalf of the trust was that menstruating women were impure and since the trust had no means to scrutinize the women visiting the shrine for menstruation, they imposed the ban. But against all odds, the High Court chose to interfere in this matter and the ban was lifted.

So, why are women being kept away from temples and places of worship during menstruation? The Hindu religion bases one of its beliefs upon the story that menstruation was a result of curse on Indra which women took upon themselves. During menstruation, women are not permitted to go to temple or touch Holy Books since they are considered impure. Interestingly, one set of adherents justifying the restriction on women from places of worship, consider bleeding women as pure as to be a living Goddess herself. They believe that if such a lady enters temple, then the energy from the idol would pass over to her and the idol would become lifeless. It is to be noted that views regarding menstruation enshrined in the Hindu scriptures vary greatly. A website known for an independent repository of spiritual advice notes that “Shruti includes the Bhagavad Gita – and in the B.G., people are not referred to as men or women rather they are referred to as souls (because a soul has no gender), so since this is the case then there should not be any restrictions on women being regarded as unclean while menstruating at all. Smriti (tradition), as the unbiased can attest to, regardless of what religion one subscribes to, unfortunately carries with it the stink of male egotistical privilege, and many other Neanderthal customs.”

Umpteen numbers of blogs can be found online tossing ideas on various religious taboos associated with the female cycle. Many justify the seclusion of women from places of worship by trying a scientific logic stating that menstrual cycle is in rhythm with the lunar cycle and gets affected by it.

As already stated, Hinduism is not the only religion with restrictive views on this natural process. Orthodox Talmudic Judaism is heavy with menstrual taboos. There is an entire group of laws that call for the separation of men and women during the woman’s menstrual period. These laws, which are present in the Hebrew bible, the Talmud, are called Niddah. Similarly Christianity prohibits women from praying in the church and Islam prohibits them from entering the mosque or reciting the Quran.

Surprisingly today, many conservatives also reason that it is for the safety of the women. The 3-5 days are called to be the period of rest since there is a huge loss of blood. But reality is far moved from this idea since restrictions are forced on women and constitute a form of discrimination. Safety might have been a concern at some point in history but with the modern development, it is no longer a concern.

These religious taboos also have adverse impacts on the lives of young girls. Large numbers of girls in many less economically developed countries drop out of school when they begin menstruating. They lose their confidence and in some way or another, accomplish a feeling of inadequacy. The problem is that the older women in the family are the ones reinvigorating these discriminatory and primitive ideas in young girls. Health wise, also, there is a bad impact on women because they fail to keep themselves clean. The challenge is intensified by low information especially among rural girls, subjecting them to further stigmas. Modern science brushes off any notion of impurity in women during menstruation. The DNA India in one report quotes, Dr. SK Bhandari, a senior gynecologist at Delhi’s Sir Ganga Ram Hospital, “There was probably a justification for such practices in earlier times, when women used cloth pads and there was only one communal bathroom in the house. But now, with modern conveniences such as sanitary napkins and private bathrooms, these practices just don’t make sense. I tell all my patients to do as much as they feel like, without discomfort — they can run, travel by bus, cook, whatever.”

As is rightly said reform starts at home and so the solution lies in changing the attitude or mindsets of people at home itself. Constitution talks about a secular India and hence there is a limit up to which government can interfere with religious practices of people. With recent temple entry issues going around in the court, some people are asking the court to stay away from religious affairs of temples. But medical evidence and logical thinking lead us to only one conclusion that this is nothing but a form of discrimination against which Constitution provides safeguards. After all, we even pray to Goddesses or Devis, aren’t they women themselves and do they not menstruate? Banning all menstruating women from places of worship cannot be justified. On a more satisfied note, it is fascinating to observe trends like ‘#HappyToBleed’ getting colossal backing on online forums. Women are now coming together to battle against the taboos. Finally, everything turns into a matter of personal choice. It ought to be left to each woman herself to decide if she wants to visit religious places or not.