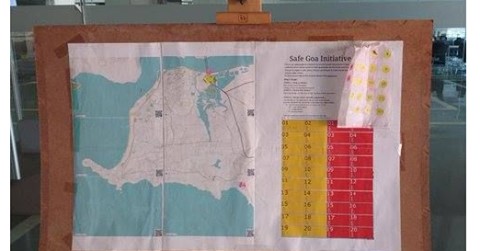 Safecity Campaigns, Safecity Events, Safecity Partnerships
Comments are off for this post

Over the last two months, Safecity in collaboration with The Bachchao project, have been doing some fantastic work in the cities of Panjim and Ponda under the project SafeGoa.

SafeGoa aims to create a platform where data on sexual harassment in public spaces can be collected by making the process more accessible and anonymous. This is done through the use of low tech methodologies such as printed open maps.

Through this initiative, the project wishes to not only encourage reporting, but also start a conversation around sexual harassment. Through this it also wishes to gain a better understanding on different perspectives, of both locals and tourists, on the issue.

This project strongly believes that crowd-sourced data like this has the potential to create a strong foundation for further interventions. On the basis of this data, communities, stakeholders and institutions can be engaged to create sustainable solutions against sexual harassment.

Till now we’ve received over a hundred reports of sexual harassment, as well the start of conversations across the state and the support of many locals on this project. We had two events in March- Safe Goa, Serene Goa at People Tree and Gender Talkies at Kala Academy.

Safe Goa, Serene Goa was an event to encourage conversation and discussion around sexual violence and harassment. Participants were asked questions such as why do they care about women’s safety in Goa, what gets in the way of keeping women safe and what will it take for women to feel safe in Goa. This event was attended by 30 people, who left the event feeling encouraged, hopeful and responsible to bring about change in society with regard to safety.

Gender Talkies was a film festival featuring 8 short videos and films from Hollaback and Must Bol, with the help from the brilliant people at Global Shapers. These were followed by discussions where people opened up about their feelings around sexual harassment, and how films and media have a strong impact on the conversation. It was also unanimously agreed on that sexual violence and harassment does exist in Goa, and there is a definite need to fight back.

The SafeGoa project will continue with such events, as well as different ways of continuing the conversation. If you are interested in knowing more about the project, or bringing the project in another city in Goa, do contact us. You can also visit us at http://safegoa.in/