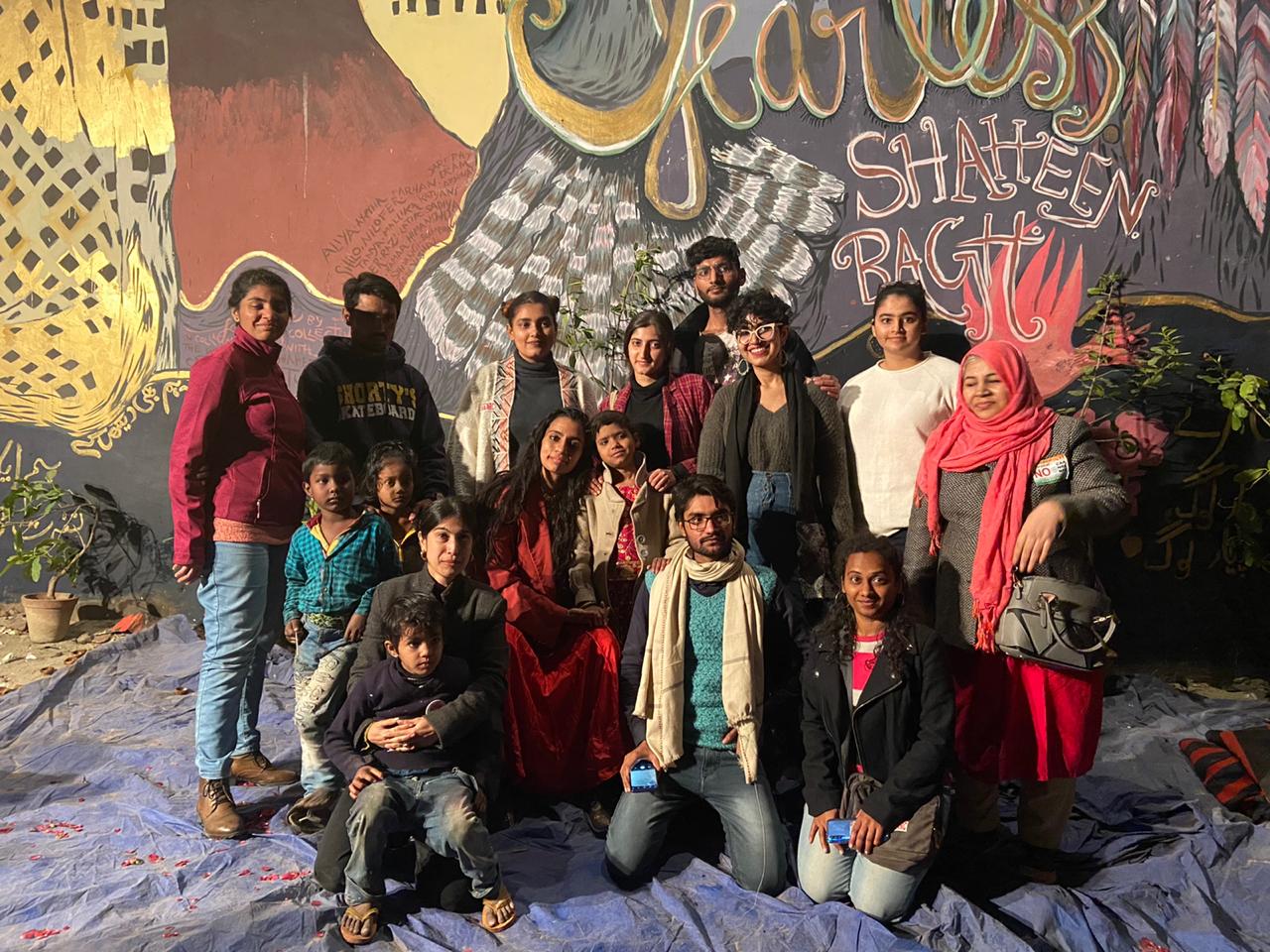 Inclusive Urbanism, NGOs and help, Safecity, Safecity Activities, Safecity Partnerships
Comments are off for this post 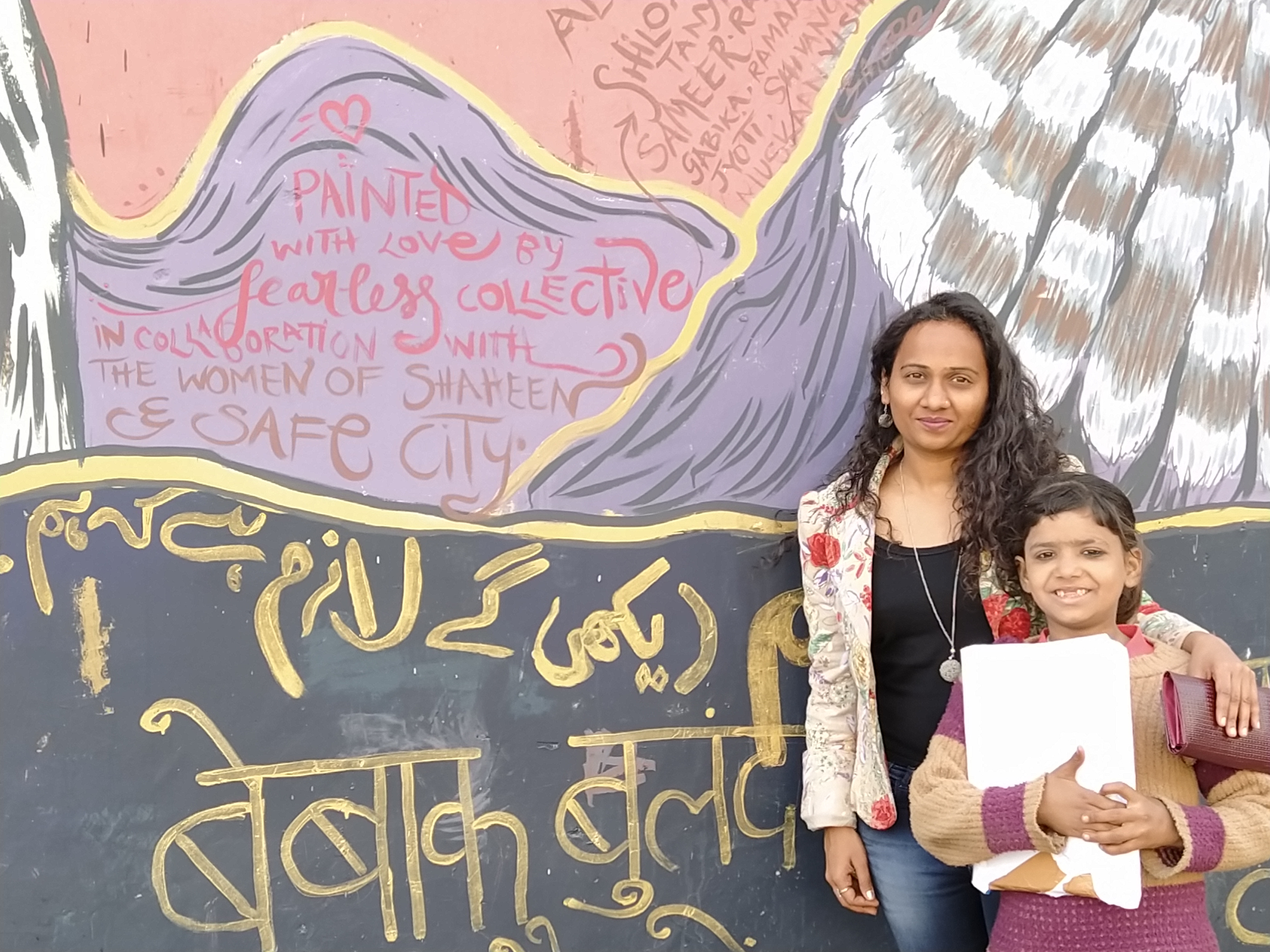 Shaheen Bagh is in the news because it is the protest site for the recently passed Citizenship Amendment Act, a discriminatory piece of legislation. It is especially important because the protest is being led by women of the community. They have been sitting in 24×7 and have grown into a huge movement, famous throughout the country. Burqa wearing women have become a symbol of this protest.

In the backdrop of this, Red Dot Foundation (Safecity) responded to a call by the Fearless Collective to honour the women of Shaheen Bagh and offer solidarity to the movement by painting a wall mural symbolising women’s strength and unity. Jyoti, Program and Outreach Officer in Delhi, shares her experience of Mural painting with them.

I was assigned the task of partnering with the Fearless Collective to find the perfect wall for the mural. Shaheen Bagh is a congested residential area and there are very few open spaces. We had to find a big wall near the protest site for the mural as well as take permission from the owners for painting it. After a lot of scouting around and talking to several people, we shortlisted a few walls. But the owners were reluctant to give us permission as there was a sense of insecurity stemming from the protests. The protest site is on a main road which has shops and shopping complexes thus making it very congested. Further, many of the buildings had multiple owners so it was really difficult to talk to everyone for permission. Finally we met some volunteers at the protest who were very humble and helpful. They helped us in finding the right wall and getting the relevant permissions. 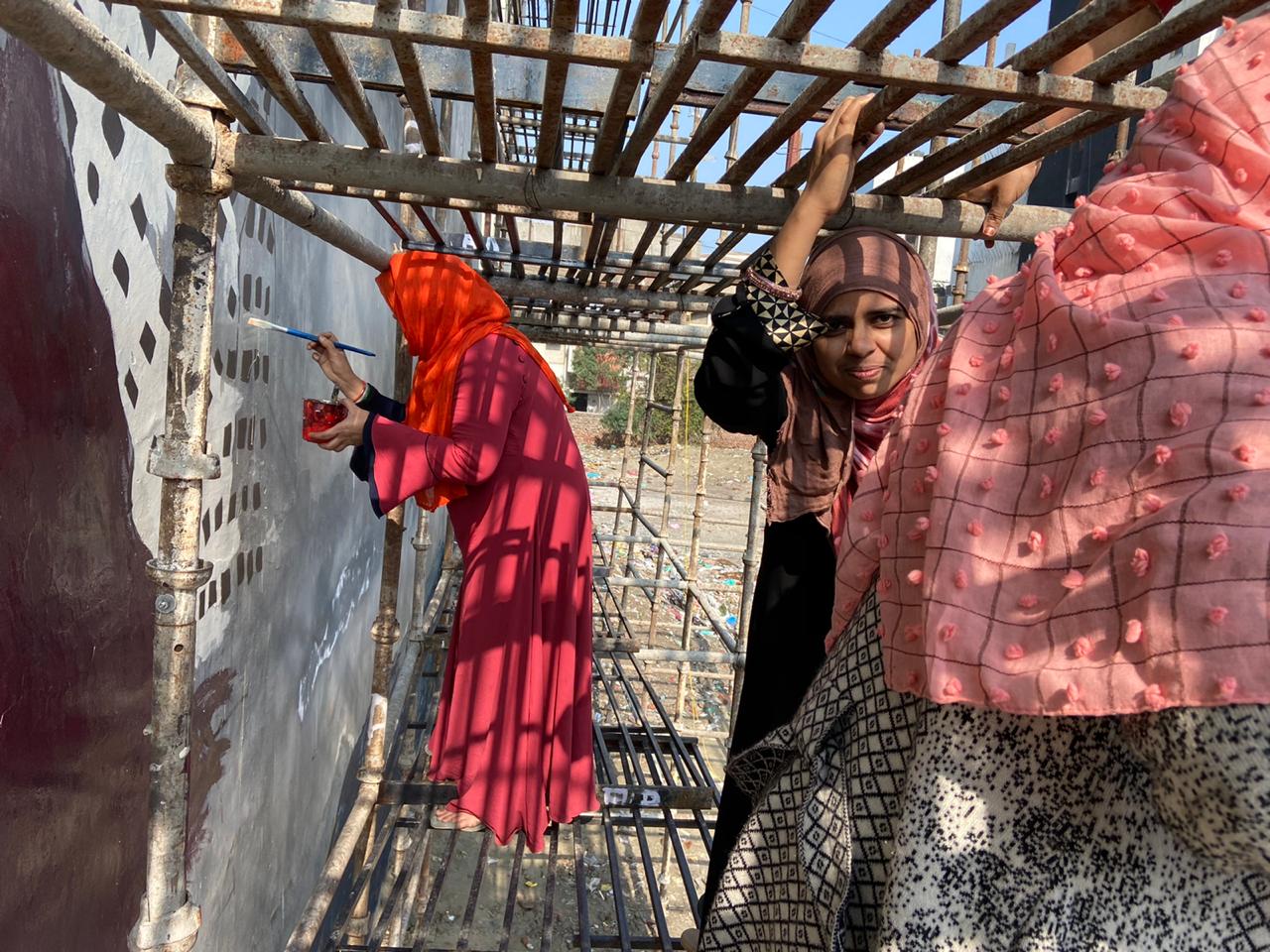 Through a few interactive sessions with the community women, the Fearless Collective made a template of the mural. It comprised of a young girl and an older woman,both wearing the hijab and holding the Constitution. In addition, the Shaheen bird was also added to the painting as a symbol of courage. 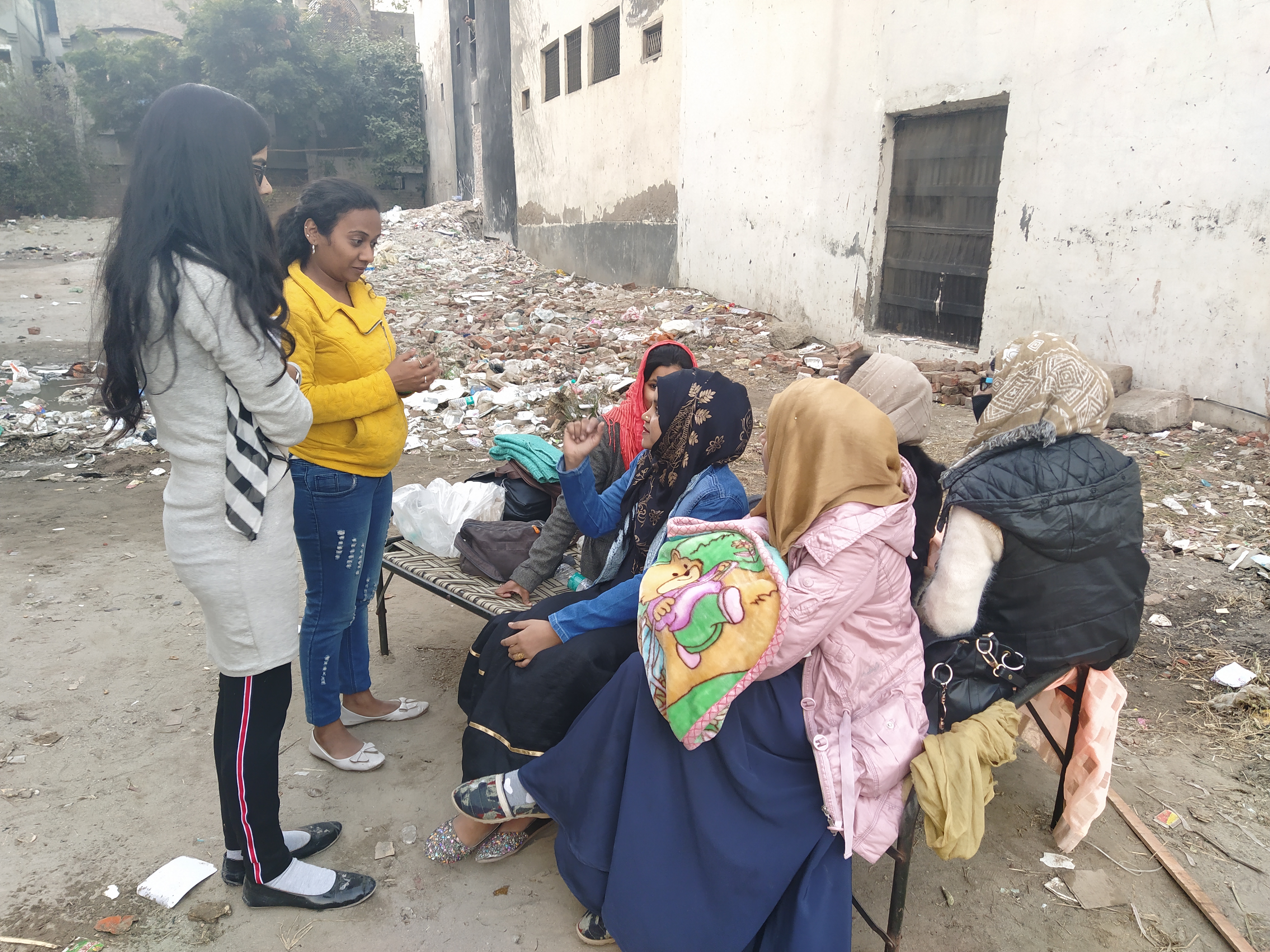 Protesters and volunteers from the community got really excited by the idea of a wall mural. They were so overwhelmed and grateful that someone came to support their cause  through an innovative artistic project. They helped us with arranging electricity, setting stage for final event and were always there for us. .

The area of Shaheen Bagh was under tight security so we had to take permission for many activities besides the actual painting. For e.g. entry of the truck which had the bamboo for the scaffolding. We also took permission from the owner of the wall to write quotes after discussing what we planned to display. 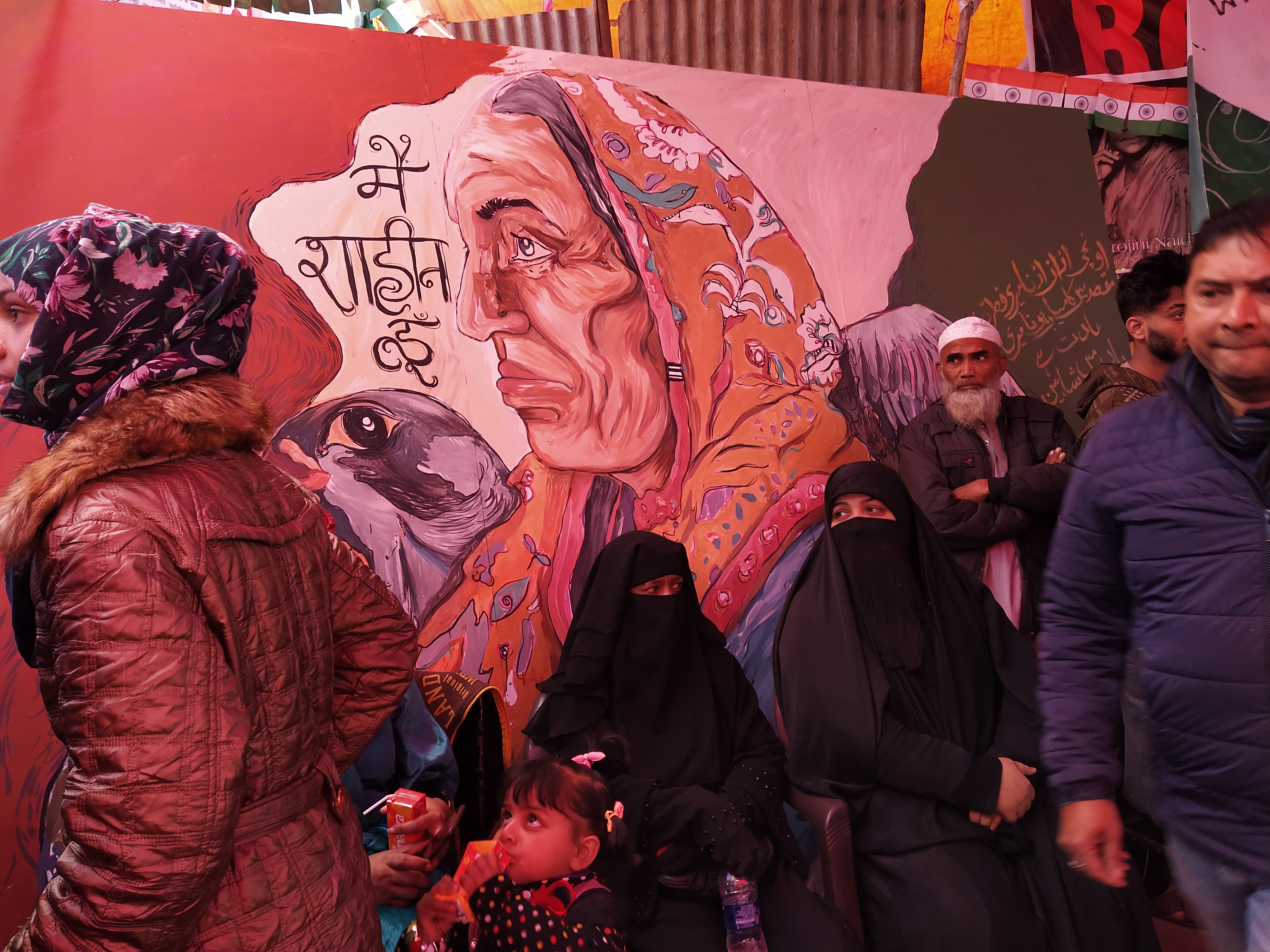 Shaheen Bagh is full of spirit and energy and the entire road is like an exhibition – painting on the street, slogans on walls, banners on the foot-over bridge, a replica of India Gate, a huge map of India made of metal, a small library, medical camp, art gallery etc. My days spent here were full of speeches about sisterhood, communal harmony, nationalism and patriotism. 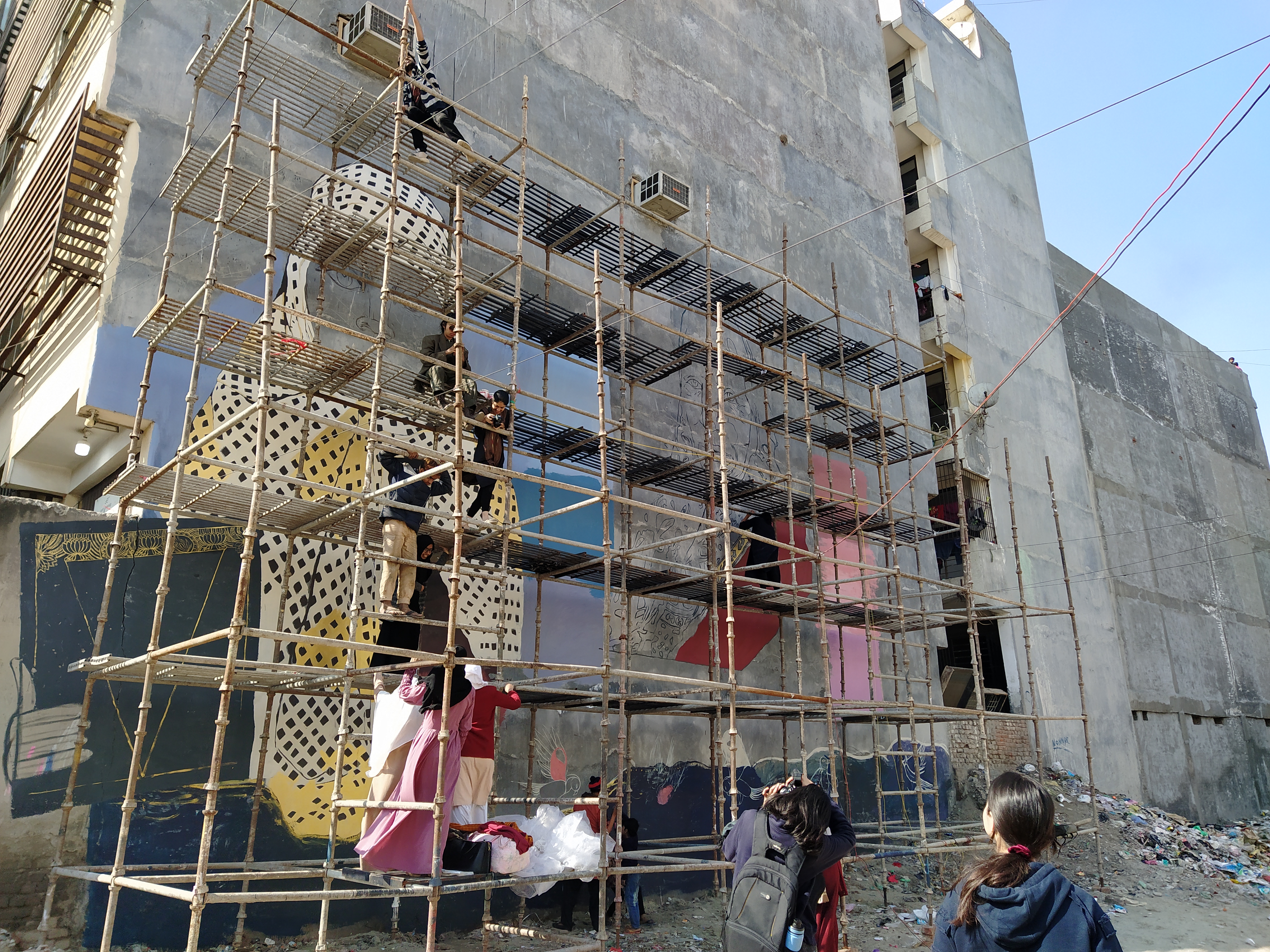 Many women and girls joined us for the actual painting and the mere act of climbing a three storey scaffolding was frightening and empowering at the same time. It was a way to assert themselves whilst trying to shake off the shackles of oppression. It was a very liberating act of resistance.

I am thrilled that I had the opportunity to participate in this activity and I thank the Fearless Collective for partnering with us.

2 comments on “Wall Painting at Shaheen Bagh with Fearless Collective”

Very extraordinary writing. I really enjoy such writing because it is very easy to understand and helpful.
Please keep writing and sharing your thoughts.