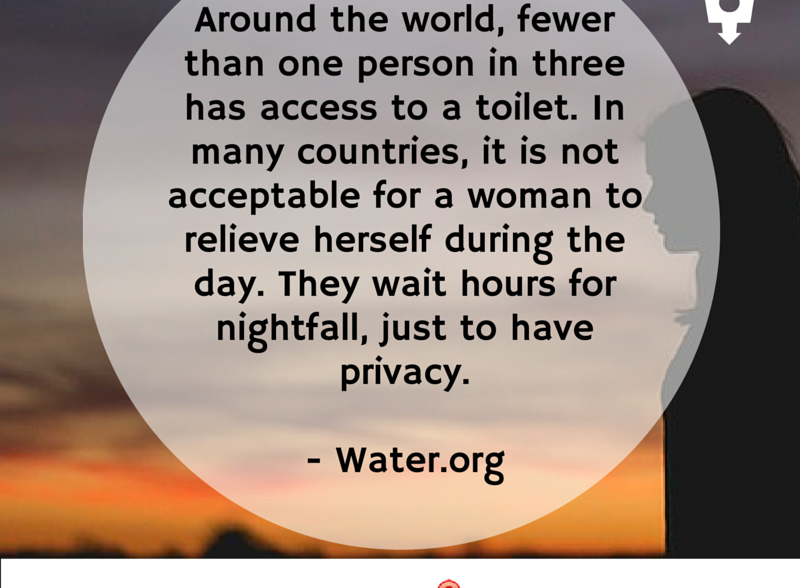 Sanitation is any system that promotes proper disposal of human and animal waste, proper use of toilets and avoiding open space defecation and maintaining the hygienic conditions. In 2010 the UN made access to water and sanitation basic human rights but still over 2.6 billion people in the world do not have access to proper sanitation while over 1.1 billion out of those people live without any sanitation facilities at all forcing them to defecate openly behind bushes, fields, plastic bags or along railway tracks. More than 130 million households in India do not have toilets and over 72% of rural people defecate openly in bushes. This takes an even severe toll especially on Indian girls and women as some estimates say that 300 million Indian women are forced to defecate in the open and most of them come from the unprivileged sectors of the society because they are too poor to afford the necessary facilities.

One of the most prominent divides between men and women in developing countries is in sanitation and hygiene. Even though women are promoters, leaders and educators of home and community-based sanitation practices but they rarely get the say in decisions concerning toilets, sanitation program and projects. Surprisingly enough the situation doesn’t get any better in major cities of India too as according to reports of 10 out of 12 zones by the municipal corporation of our capital city Delhi there are 3,172 toilets for men and staggeringly only 269 for women. Community toilets used by Females residing in the slums of large scale cities are a nightmare. “Toilet Torture” a documentary compiled by Payal Tiwari, a researcher for the independent think tank, Observer Research Foundation in Mumbai’s slums only highlights the recent BMC survey that says 58% toilets in Mumbai’s slums do not have electricity and 78% lack sufficient water supply.

The insufficiency of such basic bathroom facilities leaves women and girls no option but to venture out often late at night to relieve themselves in the open and during this interval of time they have to face the risk of horrific and more often than not even life threatening attacks of sexual violence. The world was exposed such shocking reality in the summer of 2014 when two teenage cousins in Uttar Pradesh were found raped and hanging from a tree. A 2012 survey done by a Pune based Philanthropic organisation ‘Dasra’ found that as many as 30% of women residing in towns or cities are assaulted as the lack of toilets forces them to go outdoors either late at night or early in the morning  The agonizing experience doesn’t just end there the lack of proper sanitation facilities leads to a series of severe health implications ranging from urinary tract to kidney infections. Around 1,000 children below the age of five die every day in India from diarrhoea, hepatitis-causing pathogens and other sanitation-related diseases states the United Nations Children Fund.

India is 32 years behind in attaining its sanitation goals and the situation gets worse with every year of delay. We are losing more children due to illness, neglecting more girls and wasting more productive lives. However, the situation is improving there have been a lot of NGO’s like ‘Sulabh International’ have played a major role in this change but they cannot build sauchalayas for the whole country and although the government has started taking a more serious note but it’s far from being satisfactory. We need more transparency in water and sanitation services and we need to reflect hygiene as a major component in the gender budget and it is absolutely essential that local people are engaged in the implementation of water and sanitation services. A country which aims to be a superpower in the world must take note of the fact that it loses almost $US 53.8 billion annually due to inadequate sanitation and it needs to be addressed immediately.

Merely building more toilets will not bring about the long term benefits of sanitation –for that we need to change the mindsets of those who provide the solution as well as those who consume it and hence it is absolutely paramount that we harbour a more gendered approach. Sanitation projects designed with full participation from women are 5-7 times more successful than those that focus only on men. It is vital to acknowledge the distinct role of men and women and involve them both as change agents for improved sanitation. Almost 23% of adolescent girls in our country drop out of school when they reach puberty due to lack of toilets. If we are to solve this we must promote sensitivity, not secrecy, towards adolescent girls’ sanitation and hygiene needs and it is absolutely vital that we partner with to identify and design the solutions and when that happens the solution will self sustain and we will have a more sustainable and hygienic society. One remarkable success story in the recent times is that of a strong willed woman Kabita Nayak of Odisha whose efforts resulted in 98% of toilet coverage in the small village of Sagadha in Puri. The father of our nation Mohandas Karamchand Gandhi once said that “sanitation is more important that political independence” and thus in order to make the “Swacch Bharat Abhiyan”, launched on Gandhi’s 150th anniversary a success and to build a safer and hygienic environment the government has to  materialize what our honourable Prime Minister proposed “Toilets before Temples”.