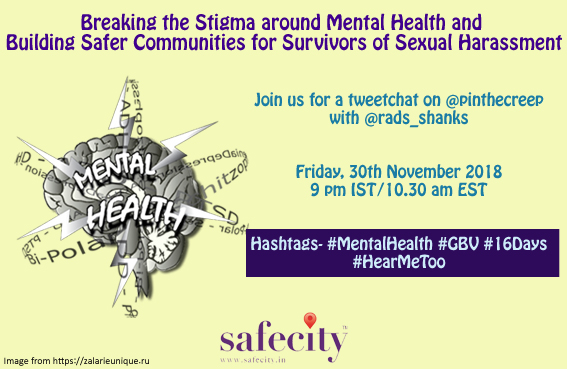 16 Days of Activism Against Gender Based Violence, Safecity Tweetchats
Comments are off for this post

On Friday 1st December 2018, Radhika Shankar @rads_shanks conducted a tweetchat on “Breaking the Stigma of Mental Health, Building Safer Communities for Survivors of Abuse” during the 16 days of activism against gender-based violence.

The chat began by asking the audience whether the rising number of sexual assaults affected their daily behaviour pattern and in which ways. Many said they were always on the alert and not so trusting of people. She then asked the audience to share instances when perpetrators had been defended for their doings in which the audience cited examples from the recent #MeTooIndia movement where celebrities, politicians and famous personalities were defended for the misbehaviour. The audience unanimously agreed that public apologies were not enough and more stringent laws needed to be enacted against perpetrators and harassers. The chat then moved on toward discussing the importance of mental health and a self-care routine for survivors and what could be done in order to break the stigma around mental health and build safer communities for all.

A tweetchat by Radhika!