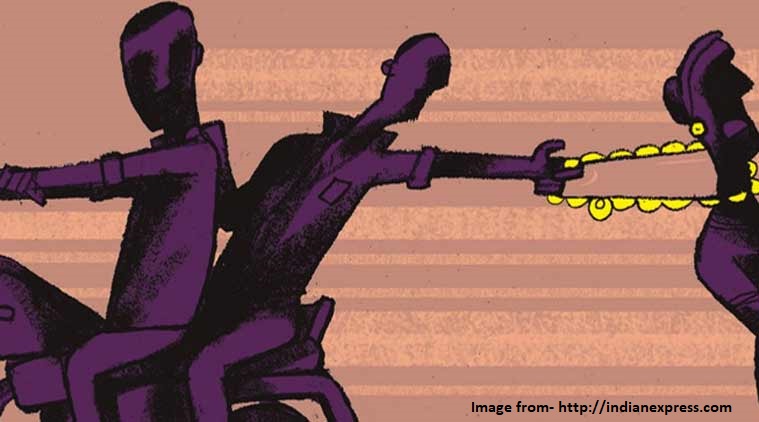 Maltitai checked herself in the mirror. The gold of the long laxmihaar and that of the choker made of coins shone as brilliantly today as they did on the day she received them from her mother in law, thirty years ago. Her mangalsutra with its black beads linked to textured balls of gold held pride of place in the trio, it being the symbol of marriage. The green sari with its golden border accentuated her complexion and added to the elegance the stray white hairs in her head gave her. She felt she looked suitably impressive as the groom’s aunt.

Picking up her nine-months-old grand-daughter, she called out to her daughter-in-law to hurry up or they would get late for the marriage ceremony. It was a semi-busy lane and the ladies were familiar with the area, having lived there for many years.

Maltitai waited at one end as her daughter-in-law made her way to the other end of the lane where the cabs generally queued up.

And then all at once she saw a bike come close to her. At the same time she felt a harsh tug at her throat followed by burning pain. She felt herself being dragged forward but she held on to her grand-daughter. Only when the duo on the bike had roared away did she realize that her gold chains had been snatched away.

By the time her daughter-in-law reached there with the cab, the painful, bloody lacerations at Maltitai’s throat required them to rush to the hospital rather than to the wedding. It was evening when they were able to go to the police station to lodge the complaint.

They are keeping their fingers crossed for recovering the stolen jewellery.

In another incident that took place one early evening, in a quiet suburban lane, Yvonne D’Silva was deep in thought, as she walked towards the market. She too was taken unawares when the gold chain was snatched from her throat leaving behind a burning laceration and a shell-shocked, traumatized woman. Here, too, the perpetrators were two young men on a bike.

Chain- snatching, which is on the rise, is a manifestation of violence against women and needs to be controlled to prevent any further impingement on women’s safety in public spaces.

A conversation with a senior Inspector of Police revealed the modus operandi of bike-riding chain snatchers. They cruise deserted and semi-deserted roads for potential victims. When they have identified one, they traverse the road to and fro, once, to set their path of escape and then they strike. So, one must remain alert on quiet roads and try to vary one’s timings and paths to avoid setting an easily observed pattern that could alert such criminals.

All witnesses to the chain-snatching must alert the Police Control Room (or dial 100) immediately and inform them of the episode and give as much details as possible about the crime and the location so that the perpetrators can be nabbed.

Police patrolling can be requested for those areas that are particularly prone to such incidents. Nowadays many societies have opted for CCTvs in their lanes and this has served as a huge deterrent.

Besides the awareness of the citizens, the role played by the police is a huge factor in preventing any crime. The police needs to take cognizance of the crime and pursue the culprits till they are booked and the loot retrieved from them. Once the criminals realize the serious intents of the police, hopefully there would be a serious drop in the rate of such crimes against women.

(Sonia Rao lives in Mumbai. Through her writings she aims to create awareness about social issues related to women. She blogs at soniaraowrites.wordpress.com).