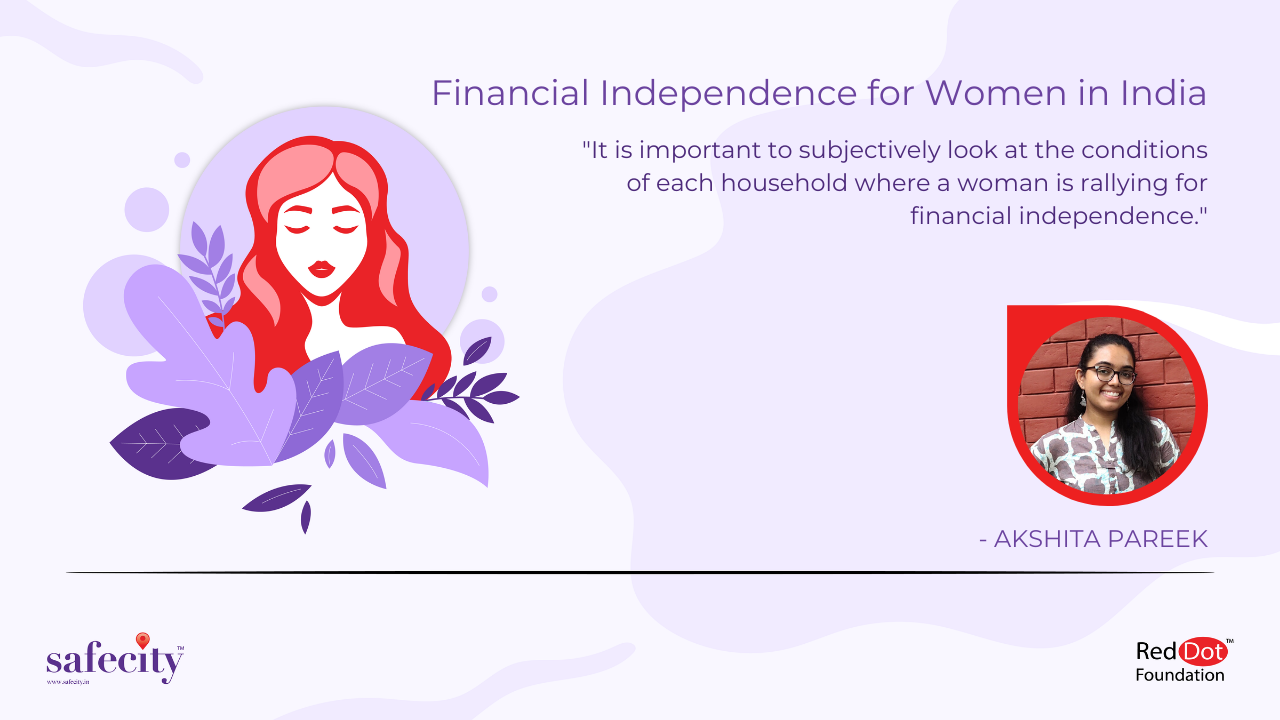 Akshita is a nineteen year old overachiever and perfectionist with big dreams, trying to wade through her entangled teenage years. An extrovert, dog lover and travel enthusiast who finds her ultimate home in the poems she can create at any given time of the day.

“It seems Eve’s bite from the apple of knowledge was a debt women are doomed to pay for eternity.” These lines from Dan Brown’s Da Vinci Code find inflated relevance in today’s modern era which still, somehow is a silhouette of the patriarchal society that has long dominated this globe. Even though, women have been able to secure a lot of quintessential rights for themselves over the years, there is an independence of a certain kind that the society doesn’t want to entrust them with; financial independence.

For centuries together, men have intentionally and single handed associated themselves with business and money matters, conveniently keeping the women out of the discussion and thus presenting them as figures lacking the financial know-how to manage money. There are countless cases where women, despite being the primary or equivalent breadwinners, do not get any say in how and where the money gets spent. Essentially, they are treated as ATM machines where they are only required to generate the money; what happens to the money next, is none of their concern. While managing finances with your significant other is an acceptable condition, being completely left out of these important decisions is the kind of exploitation that needs recognition. Here, playing an active role is the key while both the extremes are unasked for.

It becomes all the more important for women to be the architects of their own financial future because of the gigantic pay gap and other workspace discrepancies that have existed and will continue to pose as threats to their growth in the perceived future.The highway to an egalitarian society goes through a fair power play between men and women. In the 21st century, a lot of literal power stems from having money. However, the issue of  financial independence is rooted in some very problematic practices and things children are taught early on. So, when a girl is told that she’s ‘paraya dhan’ from as long as she can remember, not only is she de-humanised but also pushed into an identity crisis, left searching for a place to exercise her rights, during the entire course of her life. When the rights of women to schools and further, to colleges outside their hometowns become inadmissible without the support of a man, to assume that they are free to make their own choices, to report crimes, to manage their own money, is a gross overestimation.

In order to ensure that girls grow into financially independent women, the seeds have to be sown in childhood. Adopting a strategy that combines having open conversations, unbiased gender roles and financial education right from the very beginning will be better able to create powerful, assertive and independent women. Here, it is important to understand that financial independence can’t be created in isolation; it is a part of the holistic independence that is birthed out of a  welcoming and accommodating upbringing and environment. But at the same time, it is important to subjectively look at the conditions of each household where a woman is rallying for financial independence. Apart from raising awareness, it is important to listen to them and suggest the ways out accordingly, because the case of a domestically abused woman fighting for financial freedom will be completely different from the fight of an upper-class woman battling for ownership rights. The bottom line is to fight; fight for what is just and wilfully ours.

The 8-spoke Wheel of Financial Independence for Women

Superb
Young lady you are awesome
God bless you