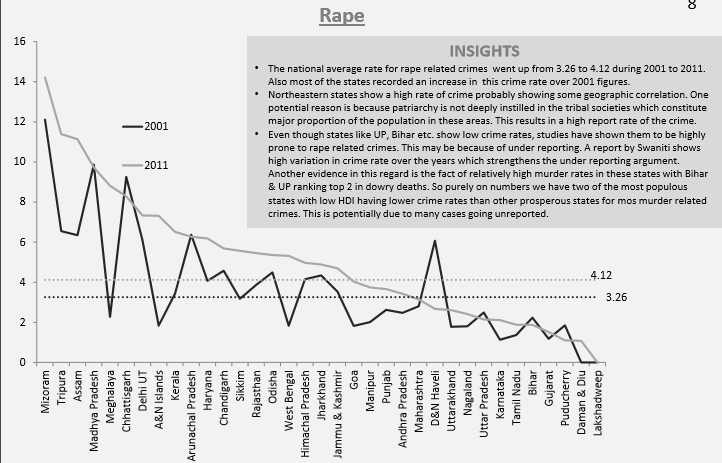 Rape: An Offence that crosses Boundaries

RAPE is a type of sexual assault involving sexual intercourse carried out against a person without his/her consent. The act may be carried out by physical force, coercion, abuse of authority, or against a person who is incapable of giving valid consent, such as one who is unconscious, incapacitated, has an intellectual disability or is below the legal age of consent. To define it in the most straight-forward manner, it means to force someone to have intercourse with you.

Generally, rape is still thought to be a crime against women specifically and has been so defined historically too, but a significant proportion of victims of rape or other sexual assault are also males.

In a report of 2017 which lists down the top 10 countries with maximum rape crimes, India ranks 5th while South Africa reports the highest number of rapes.

Men and women as well as other genders are raped but the rate at which women are ravished is a lot more than the way men are coerced into the act. According to the National Crime Record Bureau (NCRB) 2013 annual report, 24,923 cases were reported across India in 2012. Out of these 24,470 were committed by someone known to the victim. The NCRB mentioned that since 2010 the crimes against women have increased by 7.5%. The number of reported crimes in India, a country of over 1.2 billion people, has gone up to 33,707 in 2013 from 24,923 in 2012.

The majority of rape victims are between 18 years to 30 years. About one out of three victims is below 18, and one in ten rape victims is under 14. In India, a woman is raped every 20 minutes!

Therefore, does the meaning of rape end right there? NO! Rape is not only about non-consensual sex but also penetrating into a woman’s soul without her rightful consent, thereafter sucking out her self esteem and what remains of her is nothing but a body without her beautiful soul. The thesaurus gives us a very simple definition to the very heinous crime but what it fails to define is the woman’s plight and her miseries.

“Here, from her ashes you lay. A broken girl so lost in despondency that you know that even if she does find her way out of this labyrinth in hell, that she will never see, feel, taste or touch life the same again”

Moreover, women are considered as an ‘object’ of vulnerability and fragility, and thus are victims of this type of crime, which, even though stands criminalized in India, is unable to give justice to women. The kind of mentality that we have planted and with the environment that our society houses,  makes it almost impossible for women to stand up for their rights, instead they are at the receiving end even then and ironically the accused is never made to feel ashamed of his acts. The question that comes up is: why does this very society cocoon the accused and the crime that he ignominiously commits, whereas punishes the victim for standing in that vulnerable position that does not allow her to live life in normalcy?

“We live in a society that teaches women to be careful to not get raped instead of teaching men not to rape.”

According to a Report on Crime Against Women in India, the major issues for crimes against women (major crimes being sexual assaults) are: under-reporting, social status of women in India, the slow pace at which the Indian Judicial System works and the enforcement of law due to which majority of the cases go unregistered.

Further, it is painful to observe that WE, as a society, have become insensitively accustomed to the news of rape, which sounds like a routine affair and news columns are replete with reports of umpteen women/infants being robbed of their modesty. Despite rape being the fourth largest crime  in India, (in terms of reported cases only) little has been done by the laws, judiciary and the enforcement agencies and at this pace it will certainly not take long for it to become the largest crime that takes place in a country like India.

The least that can be expected to be done on an immediate basis is greater severity of the punishment, quicker disposal of the trials and empathetic and human touch by the laws, the judiciary and its enforcement agencies. Further, greater EMPOWERMENT, ENLIGHTENMENT and ENFORCEMENT of the woman should be taken care of.

In this era, on one hand we talk in high spirits of women empowerment and their independence while its flipside brings forth a sinister aspect where a woman is dishonoured, misused and pushed into the abyss of unfathomable darkness. It is about time where we embark on a journey that teaches us to respect women only because she truly deserves it and the men should understand this and empathize with her.

“It is not only the assault that breaks the victim but a thousand other questions of acceptance, rejection and her survival that bothers her and eventually pushes her into an enclosure wherefrom she then cannot escape”