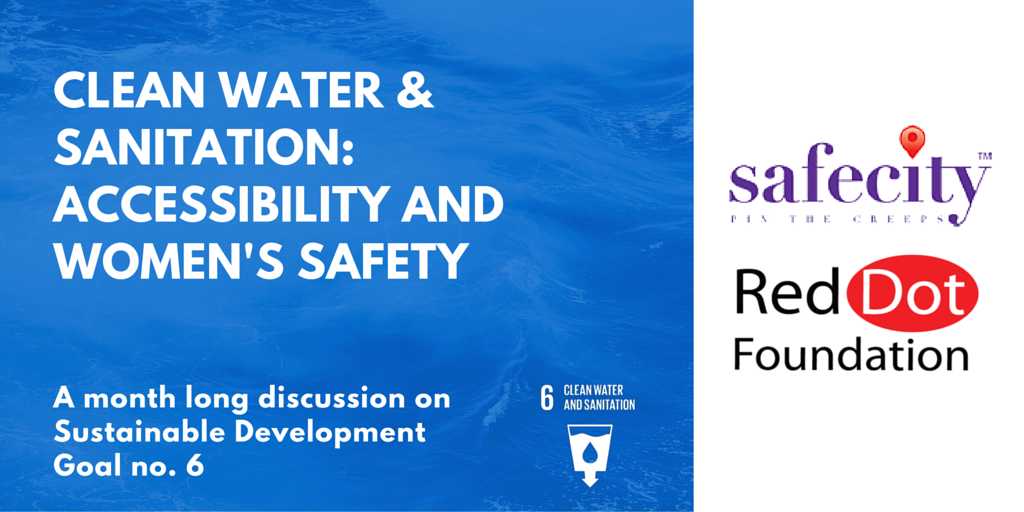 SDG 6 in a nutshell basically addresses sanitation issues in various countries and one of its principal goals has become ensuring universal access to clean water and hygiene. During the month of June Safecity held an extended discussion through a series of twitter chats specifically highlighting the lack of sanitation and its correlation with increased fear among women of sexual assault and gender norms.

Ayesha Mehrotra @AyeshaMehrotra discussed the issue of sanitation at two levels which made for some very interesting reading.

The first twitter chat of the month discussed two very prominent issues. The first being the access to public toilets- first, whether there is access, and if not how this can be addressed. Also, in what situations does a need for better access to public toilets arise in daily life? The second question addressed the fact that having to urinate in a public toilet or not urinate at all for long stretches of time affect the health of women especially young girls. And finally the ways in which this can be brought to the notice of competent authorities was discussed. The highlights of the twitter chats showed that the issue of access to public toilets was problematic at two levels- one where there is no access to such facilities at all because such constructions are not at all there and especially women and girls are having to either move a long distance to access toilets or having to defecate in the open, but the other and more alarming one is even if there is access to public toilets its cleanliness and hygiene becomes a huge problem. The fact that because public toilets are filthy and serve no purpose to the common man, who is disgusted by what he sees clearly emerged. Also, the fear of contracting water borne diseases, infections and also Sexually Transmitted Diseases (STDs) because of a contaminated toilet seat emerged as one of the principal points of discussion. So, an important conclusion to draw is hygiene is at the heart of the issue of access to public toilets and the cleaner they are, the better and an increase in number of toilets will be beneficial in realizing the SDG 6 goals. The second level of discussion was of the threat to safety of women by establishing a link between the access to toilets and safety for women. The problem with lack of access makes it extremely difficult for people with disabilities and more so pregnant women whose biological changes at the time of pregnancy make it especially hard for them to use the ill-equipped public toilets. Also, the inexplicable problem of women having to restrain themselves for long hours due to lack of access to toilets during travel etc., poses many health risks and problems which has to be addressed. 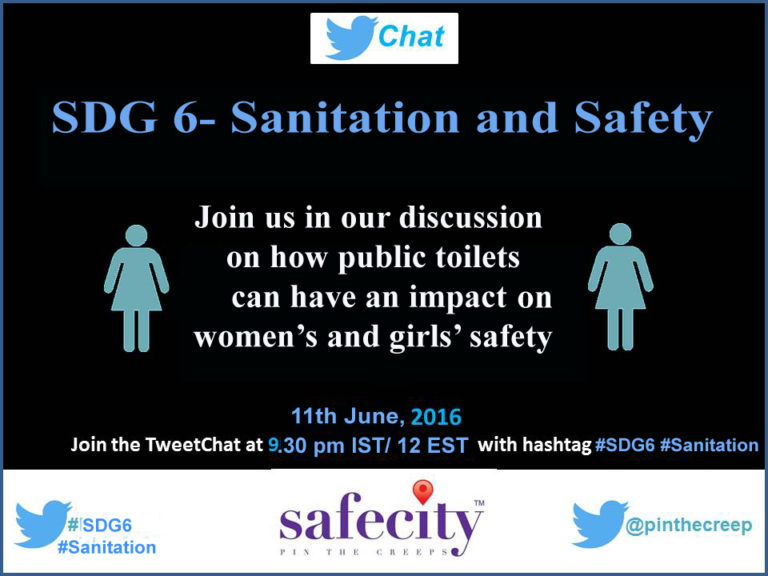 Curator Rachel Bali @kashmirikudi held an important discussion as an extension to the previous week’s discussion on the access to public toilets. Here, the discussion was regarding the effects of the lack of access.

The fact- “In some villages in India where water is scarce, men may marry twice or thrice just to have someone fetch water” was the best way to kick-start the discussion. This lead to discussions regarding women’s struggle for fetching and filtering/purifying the water and that it was an unfair burden to put on women and girls. It also affects the time they spend on making quality food to their families and children. Patriarchy and specified gender roles meant that women were also forced to stay at home and their access to clean and safe drinking water was further hampered. The conclusion drawn from these arguments was the need for help being extended by the opposite gender in ensuring safe water and a hand in providing the right nourishment to children. 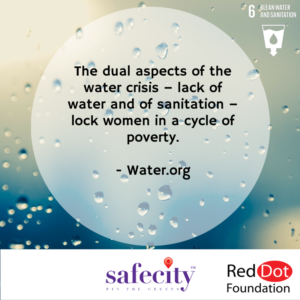 The other highlight was the vicious cycle of poverty due to which they find it hard to provide themselves with the right nourishment during the menstrual cycle and before and after pregnancy etc. Also, the fact that lack of proper and safe drinking water affects the urban and rural poor and the underprivileged to a greater extent than the people in cities. The health problems related to fetching water like standing for hours in long queues in extreme weather conditions which are taxing on the body was discussed. In villages having to draw water only from hand pumps and wells makes them susceptible to chronic lower back problems and diseases related to the urinary tract. Another important aspect of this discussion was related to the stigma attached to the practice of fetching the water and how it lowers the confidence of women and confines them to one service and provides no access to public spaces. To conclude, simple human entitlements like drinking water and proper nourishment must be made top priority and not disregarded. 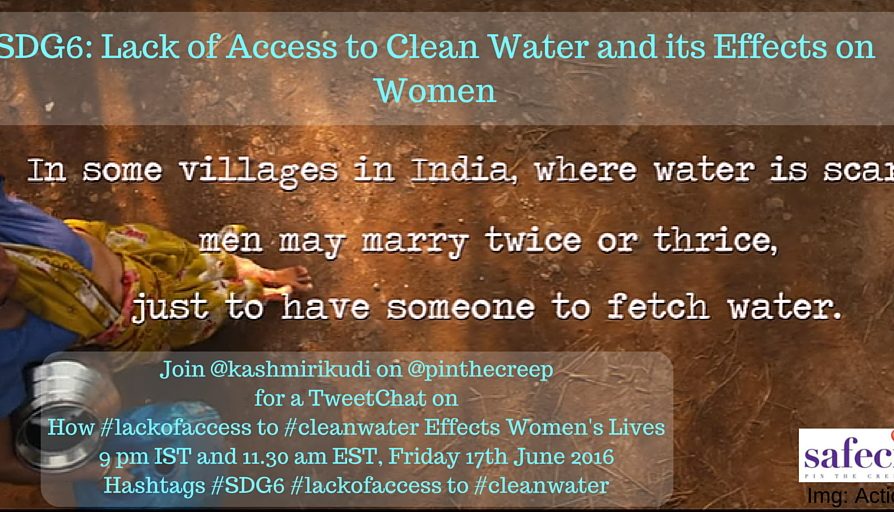 Curator Abdul Mufeez Shaheed @abdulmshaheed held a thought-provoking discussion on how gender plays an extremely important role in sensitizing the issue of lack of sanitation and how a gender centered approach will benefit the long term success of solving this problem.

The last discussion of the month on sanitation was held on the need for gender intervention in such issues of public health and well being. The issue was discussed at three different levels. The first being, the importance and the benefits of ensuring good quality water and sanitation facilities, the second was the need for gender oriented interventions in addressing the problems of lack of sanitation/access to toilets and the reasons why women are affected more by such issues than men and lastly the challenges faced by women in ensuring decisions are taken for their benefit and keeping their problems in view.

The discussion reiterated issues with access to clean toilets- health, disease control and well being and quality of life to lead a dignified life. The second issue brought attention to the identification of gender and the important role it plays in ensuring safe sanitation and drinking water. The fact that millions of women were affected by unsafe and dirty sanitation and drinking water was recognised at the outset and how special circumstances like pregnancy and menstruation required gender based interventions of adopting effective corrective measures was also discussed. It ended with the realisation that women have been facing problems women for a long time and something needs to be done quickly. 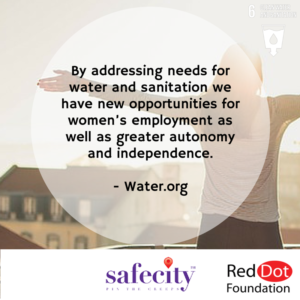 The third issue was an especially important one as it dealt with the important problems faced by women participating in such discussion and their involvement in decision making related to sanitation and safe drinking water. The discussion on twitter addressed the stigma attached to women voicing opinions and their views on matters such as access to toilets and safe and clean drinking water. The fundamental cause for such stigma and unwarranted exclusion is the fact that the sphere of policy making and discussion on quality of life was always an area dominated by males and many strategies were used to keep women out of it. Lack of representation is an important problem to address while solving sanitation problems and breaking this sort of chain of command must be ensured. 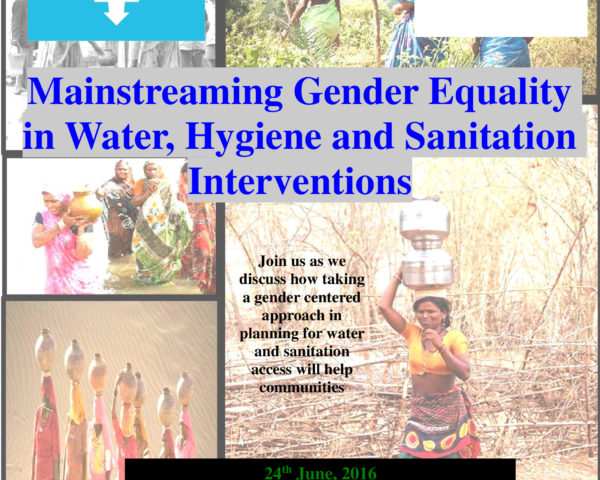 Dasra, @DasraIndia India’s leading strategic philanthropic organization, working on sanitation with special focus on women and girls has been curating for us and sharing insights from one of their reports “Improving Sanitation and Hygiene for Adolescent Girls”. 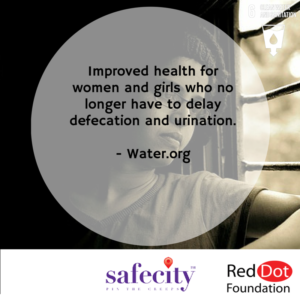