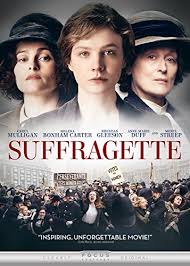 Feminism In Reel Life, My opinion
Comments are off for this post

Suffragette: The answer to “I’m not a feminist”

This movie starring Carey Mulligan, Helena Bonham Carter and Meryl Streep, is essential viewing for all young people, irrespective of their gender. Suffragette details the beginnings of the Suffragette movement in 20th Century Britain where women only achieved the right to vote in 1912 (yes, as recent as that). Through the movie we get a glimpse into the suffering that women went through without laws to protect their rights because they were not part of the process of framing those laws.

The right to vote was the first step for women to achieve equal status in the world and be considered intellectually at par with men. The women’s concerns till then, were easily dismissed by citing unfounded reasons for example, that women do not have a stable mind because of emotions and sentimentality. Sounds ridiculous? Well, it’s no different than the reality around you even today, where passionate feminists are dismissed as ‘Feminazis’ and ‘ugly frustrated women’. Feminism has almost become a taboo word, to be whispered among curious women or used as a weapon of insult against women.

Suffragette is a moving watch. It is unnerving to enter the minds of women who had to resort to militancy and civil disobedience akin to India’s freedom struggle. The oppression portrayed in the film is horrifying and nags us to look at our rural areas where such oppression still continues. The women of the movie unite as a single entity to battle patriarchy. They broke windows, they damaged letter-boxes, cut telephone wires and even executed explosions while keeping in mind not to hurt any human being. They held meetings and rallies, went on hunger strikes, got arrested repeatedly, shouted slogans, and never surrendered. Such a women’s union would be hard to imagine in today’s times. What women today need to understand is that we are standing on the shoulders of these giants, that any agency and mobility we have today is result of years and years of work by feminists before us, and the struggle the word ‘feminism’ entailed.

We wish a similar movie were made about the feminist movement in India so that we could know what sacrifices have been made by our predecessors and show a mirror to those who declare “I’m not a feminist” because of their own fears and biases. In fact, the protagonist of the movie (Carey Mulligan) keeps claiming that she’s not a suffragette in the beginning, her husband even asks her not to talk or even be seen with known suffragettes or else people would label her the same. But as the movie progresses and she comes to understand the importance of equality, she proudly declares herself as a Suffragette. As we await our peers, male and female, to accept that we should all be ‘feminists’, I strongly recommend Suffragette as a must watch.