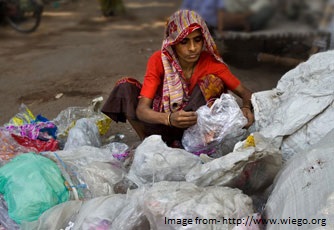 Waste is a Feminist Issue

By the year, India produces 62 million tonnes of waste. Informal waste pickers collect a sizeable amount of it. They collect waste from landfills, which bestrew the inner-city spaces. Then, they segregate it and put it in order. In subsequence, they transact the ordered waste with recycling enterprises. Thus, these waste pickers make certain the recycling of salvageable detritus. In consequence, they are the chief liaison in India’s waste management. For the inner-city spaces, their labour, then, has been of utmost importance.

In India, waste picking is a gendered undertaking. Primarily, women pick waste. For example, in Pune, 75% of the waste pickers are women. Moreover, it is a caste-bound undertaking. Primarily, out of necessity, women who are lowest in the caste hierarchy pick waste. For owing to the stigma that surrounds their caste, they are at a loss to acquire any alternate vocation. Often, these Dalit-Bahujan women are the sole wage earners of their family.

Kongu ties up my hunger,

tucks my stomach in and keeps watch

When I turn into a canal of sweat at work

For all their important labour, however, these women contend with ungraciousness. For typically, their labour is not acknowledged as valuable. Rather, it is reckoned menial. In fact, in the register of urban informal undertakings, it has the lowest social standing. In consequence, the Dalit-Bahujan women endure contempt and obloquy from innumerous entities.

The women, for example, are subjected to systematic police harassment. Without evidence, they are routinely persecuted by officers. The officers raid their material arbitrarily. For latterly, municipal waste management is getting privatised. Owing to its privatisation, the earnings of these informal waste pickers are at peril. For municipal authorities trouble them by restricting their territories. In these territories, the women nonetheless experience casteism, sexual, and physical abuse from the citizenry.  For example, Parvati Theorat has been picking waste for over a decade. Of the latter, she says, “We used to start our work very early in the day to get more waste, and were considered very suspicious by the public at large. So, some of the waste pickers would also get beaten”.

From chilly weather and searing looks

from the blasts of heat waves

from the sneakiness of raindrops

[the Kongu] offers cool relief like the shade of a tree,

becomes a warm fire that covers my shoulders.

Waste picking is also liable to a variety of economic uncertainties. For it is part of the informal economy, no stable market laws regulate it. In consequence, the price of waste is unfixed; it wavers constantly. Moreover, women who pick waste are often unlettered and uninformed. They are uninformed of the benefits they are entitled to. They, then, have little bargaining power. Exploiting their circumstance, recyclers and interdealing brokers mischarge them. For example, in their transactions, they make use of fraudulent scales and prices. Owing to such practices, many a time the women have outstanding payments. In subsequence, to meet their exigencies, they accept long-term debt obligations under desperate conditions, which favour the lender.

To then repay their debt, the women toil doggedly. Yet, in their toil, they are exposed to baleful toxins. In consequence, they commonly suffer from respiratory and gastrointestinal ailments. Often, they also have musculoskeletal problems, and numberless wounds, lacerations, and infections. However, their access to protective equipment is still restricted.

My dirt rag that rolls in my hands, sweat, bed, bones, limbs

in pleasure and sorrow,

my kongu rag that sticks to me

in work and song, in crisis and comfort,

like the filth that clings to my feet, the companion

when does my perspiring kongu find the time for rest?

Indeed, the feminists ought to ask, when does it?