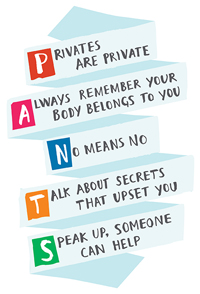 She began the workshop by talking about touch and the different types of touches. She asked the girls what they understood about types of touch. She came to find that very few were aware of the difference in touch and safe and unsafe touch. Through examples she taught them about the types of touch, consent and their 4 extremely private body parts. They were also told that only they have the right to their bodies.

Naina showed them a video called Komal making it easier for them to understand touches, the child helpline number and the importance of having an open relationship with a trusted adult. They learned they PANTS rule along with No-Go-Tell.

Towards the end of the workshop, a few of the students shared their stories. One girl spoke of an experience she had when she was just 8 years old. Her neighbour’s son came to her house when she was alone and held her from the back. She shouted until another neighbour came to her rescue.

Another child found the courage to share her experience of being touched inappropriately by her cousin brother. On complaining to her mother, he was punished and stopped groping her for a while. After some time lapsed, this behaviour began again.